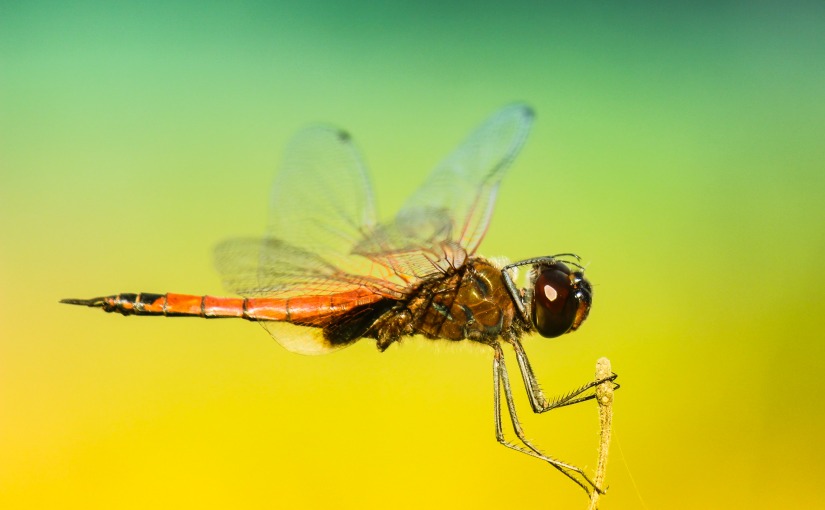 As children, we ran thru fields and meadows and trusted woods. Dragonflies flew around us, amongst us, hovering above us.  Born of the water, they originally were thought to be the water nymphs of the great god of the oceans, King Triton,  where all waters meet.

Dragonfly, dragonfly, where can you be?

I remember summers in Appalachia, scores of these colorful creatures invaded the sky and with the help of the sun’s rays…  iridescent to display color like a kaleidoscope. ’At the end of the day we’d drive through Cades Cove and witness the nightly retirement of all living thing but not all are in need of a nights rest. Midnight along the bayou’s of my native Louisiana under a full moon the dragonfly displayed an armory of color outfitted with the magic of iridescent bodies in darker hues So what do these changes of the Dragonfly in colors mean to us? Changes in mental and emotional maturity give way to grace and elegance as we identify with the iridescent deepening of the angle and light on the colors of the Dragonfly. Last week was the Harvest Moon and as I stood on the beach and watch the bright lunar surface ascend from the eastern sky, I became aware of a blue light in the distance coming my way. The closer it came I realized that it was a dragonfly adored with the most velvet of blue bordered in deep greens. .And as it continued on its way looking toward the Atlantic I tipped my hat, and whispered ‘’adieu’ until’ Dragonfly, dragonfly, where can you be? Have you found another from across the sea? Dragonfly, dragonfly, I know that can’t be. For I am the other from across the sea. ©jc2018-9 *Image Pixabay