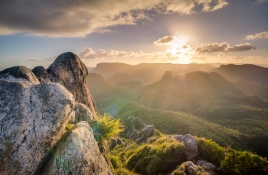 “Our life today is not conclusion; a sequel stands beyond where we will walk hand in hand. It is as invisible as music but positive as sound.” – Emily Dickenson

The cold morning air nips at my hands on this autumn day as I arrive at the Blowing Rock and stand at the edge where it drops off into Johns River Gorge some 3000 ft to the depths below. According to legend, if you drop anything from this cliff, it will return to you. Even the snow will fall upside down. Is this a myth, wind currents or magic? Maybe all 3 are correct; for the wind is magic and mythology speaks to truths unseen.

I see the tree line in the distant horizon showing off colors of green, orange, burgundy and yellow. A hawk appears, hanging solo, red tails in the sunlight from far off high.  Flying in broad sweeps from left to right, he proceeds to slowly descend into the valley of dense forest. I watch with curious eyes and wonder what? What is he telling me? Lower and lower he glides as the hour disappears and he vanishes. Suddenly I know as though our minds became one but for a second. He has come to take our brother home. So the Blowing Rock doesn’t return everything. Or does it?

The Legend of the Blowing Rock

A chieftain, cautious that

his only daughter would marry the wrong man, brought her to The Blowing Rock in the care of a squaw mother. One day while wandering along the cliffs she spied a Cherokee brave far below. To get his attention she shot an arrow down into the valley below. From this meeting, they became inseparable and would soon marry.

One evening the moon turned blood-red and the young brave knew he had to return home for trouble was in the sky and in every cloud. The maiden begged him not to go and in his confused state, torn between love and duty he fell off the cliff into the gorge. Grief-stricken, the maiden prayed by the cliff every day and night for her lover to return. And one day when the autumn sky became dark again and the moon turned blood red, the young brave was lifted up by the ever-present wind and returned to the maiden unharmed. And ever since then, as this perpetual wind blows, everything that falls from the cliff into the gorge below returns from where it fell back to the Blowing Rock.

11 thoughts on “The Blowing Rock and The Red Moon”